Art as engagement: creative ideation in the fight to save the planet

In conversation with Christina Battle, Ron Benner and Shelley Niro on how art is changing our relationship to the environment.

The unique relationship between nature and art. (Roman Kraft / Unsplash)

As of this summer, Ron Benner’s garden installation As the Crow Flies—which is displayed on the grounds of Museum London—will officially turn 15 years old.

Benner’s work is part of a series that combines gardening, installation and photography. More importantly, it is a flourishing visualization of his research depicting sites south of London, Ontario along the meridian of longitude 81.14. In spite of worldwide calamity and climate catastrophe, his dedicated audience has been waiting for him to get back to work.

“They were waiting to see if I was going to show up, and there I was. I had all the plants ready and I was working away and these people were so happy that I was there,” Benner says. “For these times especially, it’s been quite humbling seeing just how much people needed me. I knew that people liked my gardens, but I didn’t realize how important it was to them until now.”

The importance of his work is relevant to a human audience, but also to the toads and birds that find themselves at home in Benner’s garden.

Ron Benner's installation, As The Crow Flies, at Museum London in 2014. (Roland Schubert)

Art, as a discipline, does not seem like the most capable or apparent choice when it comes to problematizing environmental degradation or facilitating engagement with the environment. At the same time, it is all too obvious that art should not be reduced to mere aestheticism—it can be more than an object that brings sheer emotional content. Today, the boundaries of contemporary art continue to broaden, creating new opportunities within creation and methodology. As a result of this shift, the art world has seen a new wave of engaging environmental works coming onto the scene.

Art might not be the way that the world solves complex, environmental issues—but art can offer genuine considerations on how we can approach them. For the casual observer, art is something that may take the form of painting, sculpture, or even film. Yet there is an entire body of socially-engaged artwork that has yet to make its way into public purview, past the art world boundaries into the real world. As with most disciplines looking to combat climate change, biodiversity loss and human-centred ideologies, many Canadian artists are addressing environmental challenges through their work.

For years, multi-faceted media artist and curator Christina Battle gardened and shared seeds as a non-committal yet passionate way of engaging with the world. In 2015, her practice of sharing seeds and exploring economies of exchange became a formal artwork, moving outside of her daily life and into the scope of criticality. Battle’s practice can only be described as multi-disciplinary, which centres heavily on topics of disaster and environmentalism.

“For me, growing plants and having the opportunity to watch plants grow changes the way that I think about time and space and my own sense of busyness and my own speed in the world,” Battle says. “I think that all of that is important in shifting a framework in thinking about a worldview.”

Picking through fennel seeds prior to saving. (Image courtesy of Christina Battle)

For Shelley Niro, award-winning artist and filmmaker, her memories of the outdoors have been a driving factor since she was a child.

“A lot of the work that I do comes back to remembering what it was like to be outside and feeling the air and having bugs bite you," Niro says. "It’s like you’re participating with the world.”

Niro adeptly underscores the power of nature, a force that inspires a range of artworks driven by and for the earth. Niro’s respect for the earth is evident in La Pieta #1, through the blue of the water and the complexity of the wampum frame.

“I wanted to use that image of water as an expression of being born, since you come into the world through a body of water,” she explains.

Whether it is through the greatly enlivened installations of Ron Benner, the intricately vital photographs of Shelley Niro or the billboards on disaster by Christina Battle, art is being activated in many forms and in a multitude of spaces, right here in Ontario.

In many ways, art can be seen as a strange alternative to other forms of action. Why do something within the realm of art when it can be done within the realm of the thing itself? Why make artworks that talk about degradation when you could be a biologist or a conservationist? Since studying agricultural engineering in 1969, Ron Benner has been using his work to fight against industrial agriculture.

“I really just wanted to be a farmer, or work with farmers. That’s what I really wanted to do. I ended up being an artist because I had a lot more freedom and all of my friends were artists,” Benner explains. “I could have been an organic farmer, but I just really wanted to critique what I was up against when I was a young student.”

Being part of an inherently flawed system means moving outside of it and working diligently to offer up alternatives in theory and in praxis.

Through the infinite, prototypical possibilities of art our attention is often drawn to greater, more abstract questions surrounding the health of our environment. In Christina Battle’s ongoing project, seeds are meant to disperse, she manages to share the gift of growing plants while simultaneously underlining how capitalism and economic fallibility play into this process.

Through the barter-and-trade system utilized in her work (that is sometimes more about gift economies than equal exchange), there is a similar exchange transpiring between plants and humans.

“I think people are really accustomed to thinking that they’re going to buy this seed pack and then it’s going to do this thing for them, and that is really not how plants or seeds work," Battle says. "They don’t work within the realm of capitalism."

Much in the way that contemporary art has developed parameters for critical artwork, so have humans adopted industrial and standardized processes for engaging with nature—processes that have ultimately shaped, and even distorted, our views on the environment. Settler-colonialism and neoliberal ideology have imbued our relationship to nature with very damaging ideas; nature is a resource to be claimed and profited from, and that any subsequent damage is the responsibility of the individual, not the system.

In Canada, we have the opportunity to learn from Indigenous communities on how to consider traditional and practical ways of engaging with Earth, and to work with them to embrace new perspectives and world views that will build a more sustainable future.

“Although we are sensitive to different things, you have to really put yourself in a position of trying to learn about what there is to do.”

If we want any sort of change, it’s going to take all of us: artists included.

Many practitioners have already taken to this task, but artists assert there is still work to be done.

“I think we have to go beyond just acknowledging Indigenous frameworks and ways of being, especially when it comes to food and land,” Battle says.

Ron Benner recalls how Indigenous frameworks have influenced his own values and the work that he continues to do.

“I believe in the public ownership of our food systems, of our water systems, because they’re for everyone and they shouldn’t be owned," Benner says. "That relates back a lot to Indigenous peoples around the world who don’t believe in private ownership of things that are essentially necessities for us to continue to live.” 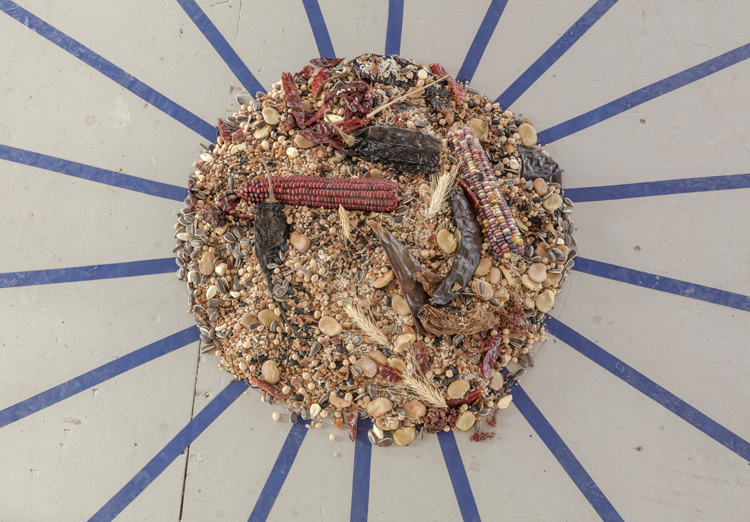 Intertwined with both culture and humanity, art may be our greatest tool for drawing attention to environmentally rounded issues and, more importantly, encouraging people to care. As obvious as it may seem, a collective and interdisciplinary approach is needed to combat something as enormous and pressing as the challenges facing our environment today, whether it be as complex as soil erosion or as banal as plastic straws.

Art may not change the state of the world all at once, but it serves as a mirror that reflects the implications of a degraded environment on human life. Local and international artists are using their creativity to reconnect with nature, to promote mass understanding and to enact audiences to care.

When there is so much at stake, the collective responsibility can feel heavy and bleak—but this is where art can come in to do some work. Niro feels the weight of our fears, but follows through anyway.

To see more of the artists' work, visit:

Put your money where your heart is with impact investing

Diving under ice: Tales from 50 feet below